Calibrating the speed on a treadmill 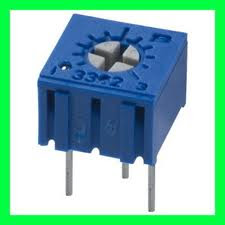 How to tell if your treadmill is running too slow…..or too fast
This blog is about how to set (calibrate) the speed of a treadmill running belt. It assumes you have a basic understanding of treadmill control systems. Please note that these instructions apply specifically to DC motor systems in domestic grade treadmills – different rules apply for AC, commercial machines!
To change the speed you need to get inside the machine by removing the motor hood. Remember to disconnect the mains cord first and let the MCB capacitors discharge for about 3-5 minutes before poking your fingers in. Often there is a “speed” potentiometer lurking somewhere on the Motor Control Board (MCB) that you can use to adjust the running belt speed. This is normally a tiny blue square box with a screw head adjuster (see picture above) that can be turned with a small jeweller’s screwdriver.  When setting the speed, I use a contact-tacho to measure the actual speed of the running belt. This allows you to set the speed fairly accurately and is perfectly adequate for most people. Incidentally, I got my tacho from Machine Mart http://www.machinemart.co.uk/shop/product/details/ct2-digital-contact-tachometer
There are 2 systems that treadmill designers use to determine running speed. One is called a closed- loop system and the other is called an open loop system. One is easy to adjust and the other is not.
On treadmills where there is no speed sensor such as Roger Black, Reebok and i-run, the control console has no idea what the actual speed is, since it has no speed feedback. All it does is pump out a speed signal to the MCB according to what the user chooses and hopes for the best. This is the open-loop system. When you change the “speed” pot setting on an open-loop system you’ll see an immediate change in motor speed according to how much you have turned the pot. It’s just like an old-fashioned volume control – you turn it up to go faster and down to go slower.
However, treadmills with a closed-loop system (ie. those with a speed sensor) will tend to auto-calibrate the speed, within reason, to maintain the actual speed set point which has been defined within the control console’s settings. These are not so easy to adjust because the settings are often burnt into software which you can’t change, or are hidden in an Engineering menu, which you can’t find.
On closed loop systems, when you step on the running belt you’ll probably hear the motor slow down due to the effect of your added weight, but listen closely………the speed will quickly and smoothly recover as the control console senses the drop in speed via the speed sensor and turns up the wick to compensate for your lardy proportions. In this case, the speed pot is there to provide a way for manufacturers to limit the maximum speed rather than for calibrating the speed. This allows them to match the MCB to the motor or in some cases It just allows a means for product differentiation – the higher the treadmill specification, the higher the speed pot gets turned up in the factory!
On some MCB’s you’ll also see a secondary potentiometer which is usually labelled as “torque”. You use this for adjusting how quickly or slowly the machine performs the auto-calibration. Set it too slow and the machine may never reach the required set speed but set it too fast and the machine will overshoot the set point and “hunt” (oscillate faster and slower around the set point without actually settling down).
A long-time, loyal customer of mine gave me the inspiration to write this post. He has 2 x treadmills side by side asked me to check the speed of them both. He was convinced one was running slower than the other. He was right! With my tacho, I measured about 10% difference between the two machines at the same indicated speed. Unfortunately, both his treadmills were closed loop systems and each time I adjusted the “speed” pot, the console would auto-calibrate to bring the speed back to what it thought was the true speed. Eventually, my customer and I decided that we would consider this discrepancy as an allowable error and we gave up. Sometimes life is just too short to get hung up about these kind of things (but it helps if you understand what’s going on)!
Posted by The Treadmill Engineer at 22:50

I've got a basic Reebok i-run s that I'm positive the speed is incorrect. I took a look inside and believe I've located the potentiometer, a small black box with a screw in the center of it. Being an absolute novice with electronics I think I'll end up taking my time using the tacho, then unplug it all, adjust the pot, plug back in and try the tacho, etc until I get it close enough. Will that work or does the pot need power while being adjusted?

Ignorance may make the process more involved but will calm my nerves!

Hi - Yes I agree. Always remove the power source and be aware that there are capacitors that can store charge for several minutes after power off, so its best to wait 5 minutes for these to discharge before going in! You can also check the speed by measuring the length of the running belt and then counting the revolutions in one minute. You can then calculate the speed which can be easier than using a tacho. I find tacho's can be a little variable unless you have access to a good quality one!

I have a Proform 9000, when I step on the belt it slows the speeds up bit also speeds up when walking up hill, there is no torque screw on this board. If I adjust the speed up will the torque go up as well? Thank You! For a treadmill with the supposed most HP in its class, I'm sure something is wrong, I can slow the belt down or speed it up with my feet quite easily and it makes it feel very cheap. Any advice would be appreciated.

Hi John - this could be a symptom of a dry or sticking or worn running belt. Try adding 10-15ml of silicone oil and if that does not help then you may need a new running belt. You should not normally need a increase the speed or torque unless you have changed the MCB or the motor in which case this can be done for fine tuning the new components.