Treadmill Motors Part 1 - How do they work?

I thought I’d start the week with a quick overview, in layman’s terms, of how PMDC treadmill motors work (I’ll explain what PMDC means in a sec). I think it’s important to have a grasp of the basics so that you can appreciate why it is important to correctly test a treadmill motor and to understand why they cannot be tested reliably using just a 18V drill battery and multimeter!  What follows applies to most domestic treadmills and some commercial treadmill motors. It does not apply to AC motors which are most often found in newer, commercial grade treadmills. 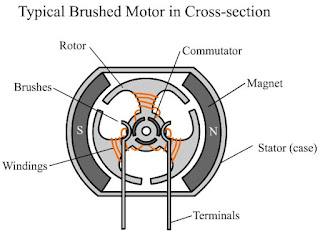 ﻿﻿﻿﻿Permanent Magnet Direct Current (PMDC) motors are built using fixed magnets which are mounted around the inside the case. Running through the the middle of the motor is a shaft which turns on bearings. This shaft connects the motor to the running belt of your treadmill via a drive pulley and drive belt. It delivers the energy to turn the running belt when you press the start button on the treadmill. Mounted on the shaft inside the motor is an iron core (rotor) and around it are multiple copper wire loops known as windings or the coil. An electrical current is passed through the copper windings of the motor. The current comes from a motor control board which is connected to the motor via two carbon brushes. The motor controller's job is to change the AC mains voltage from your wall socket into DC(direct current) which the motor needs to operate. It would not work if you connected it directly to the wall socket! The motor control board also allows you to change the motor speed by changing the current going into the motor according to what speed  setting you choose on the treadmill console.

The diagram above shows a simplified arrangement of the motor components. When an electrical current is passed through the windings inside the magnetic field of the magnets, the coil will rotate which produces the turning motion of the motor.
You may recall from you physics lessons that there is a relationship between current, magnetism and direction of movement which can be described by Fleming's right hand rule. Don’t worry if you’ve never heard of it or can't remember, the point is simply that the power in the motor's rotation depends on the strength of the magnetic field created by the permanent magnets and the amount of current travels through the copper windings. In a motor, power is referred to as torque and this is really important as you need to make sure you have enough torque so that that the treadmill turns smoothly when you stand on it. The torque of the motor is usually stated in Watts or Horse Power (HP).

You can only increase the torque by either increasing the magnetic field of the permanent magnets or by turning up the current which passes through the windings. In practise, you can’t increase the magnetism of the permanent magnets (they are permanent and you can’t change them!) so you can only increase the current through the windings to get more torque. The amount of current that can pass thorugh the copper wires is limited to the size of the wires and the capacity of the motor control board (MCB) which provides the electical current. If you try to pass thorugh too much current you can burn out the copper windings, which will cause them to get hot and melt, or you will overload the MCB and cause it to fail.

Ok, so that’s enough about the basic operation. In Part 2, I’ll explain why this is important when it comes to testing a DC motor.

Posted by The Treadmill Engineer at 06:33

As I Know torque is the result of multiplying of force by distance. So, I would say that torque is stated in kg x m, lb x foot and so on. You can use Watts and HP to mesure the power capacity only.
Sergey

You can use HP for the power given by the Torque in this case so it would be Torque times Velocity.

My treadmill blows the home trip switch when i press the start button. The red light shows on the circuit board, incline works fine, belt moves when connected to a cordless drill battery. But as soon as the motor starts moving it trip the house fuse and i need to reset it. Is it the circuit board or is there anything else to check

Also check the running belt and platform for wear - excessive friction due to wear or lack of lubrication could have caused the original problem. For info, the motor can't be reliably tested using a drill battery. This does not "load" the motor sufficiently to expose problems with the permanent magnets which can cause excessive current draw (the effect is similar to excessive friction). My Engineers use a separate motor drive unit so that we can test the motor in situ and measure the current draw using a current clamp. Treadmills in 220V 50Hz territories should pull less that 5A on the motor at 12kph with a 95kgs person running on the machine.

hello and thanks for your useful information publishing.
I had a question and not answered yet.
My brother is an physiotherapist. and he is going to build a hydro-treadmill by himself and asked help from me.
may i ask you to provide some necessary information of treadmill working mechanisms in water to us? I'll be so thankful of you.
soroush.delpassand@gmail.com

This is an interesting discussion. I have a motor that pulls 3 amps w/o any load but jumps to 9-12 amps when walking on the treadmill. The running belt is new and adequately lubricated. I recently had charring of the spade fitting on the MC board so I know the motor is pulling to much current and overheating the MC board. The fuse is a 15 amp fast acting but the board spec is 12 amp so I suspect that is partial reason for the overheating of the board. The DC motor is over 20 years old and used a lot but the brushes are not chipped or charred and look smooth. But your discussion on magnet strength reduction due to electrical voltage spikes is one thing I never thought about. So the MC board is operating OK (the output is 15 - 85 DCV) and the walking belt and board do not have much friction and the motor brushes are not worn and make good contact. The only thing left is the age of the motor and the decay of the magnetism which now causes an increase in amp once I step on the walking board. The MC board is overheating due to the higher amp draw plus the over-rated amp fuse. Does this make sense? I have another motor (new) so I may put it on to see if the amps drop (plus I will put in 12 am slow blow fuse). Does this make sense to you, it is the motor demagnetized is causing high amp draw (i.e - amps increase to obtain adequate torque) when I step on the walking belt?

Hi Paul P.
Yes your comments do make sense. I agree that it could also be the case that the running belt is worn and there is too much friction between it and the deck but if you have inspected the surface of the deck for damage/wear and added some silicone oil then it can only be the motor. I have a movie here to show how to check and add lube to the belt https://youtu.be/gCDhYnNYfKA?list=PLXHEoPxMPM95vWgAOpHEres1DfFahRqM_

Finally, I have invested in "new" motors which are in fact new old stock. In other words it turns out they were manufactured at the same time as the original treadmill but have then sat on a shelf for 10+ years which can mean they also test on the high side for current due to depletion of magnetism. Usually there is a date code on the motor that tells you the manufacture date. In such cases, it's usually the end of the road and time to buy a new machine!

You were correct. The "new" motor was date stamped 1997 so I installed another motor made in 2005. The amp draw now under load is now 6-9 amps so the issue was the motor as you concluded above. Just want to say thank you for your helpful article and advice!

Hi Paul P
Thanks for letting me know....glad it worked out!